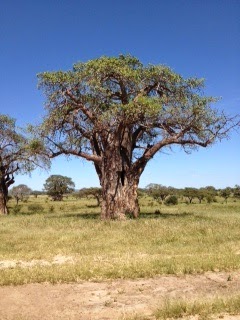 If you have been to Animal kingdom at Disneyworld, there is a glorious tree in the center called the tree of life. Of course American come to Tanzania (being a little unclear on which country has IT) and want to see it. So the locals very tactfully explain that the Tree of life is not one special thing but a type of tree that grows all over the place. They live to be over 100 years old, shade humans and animals and hide them from predators, hold generations of birds in branches, and are generally a constant on the nomadic plain. When they die they rot form the inside out. When the center is hollow but nutrition still gets to the leaves, they are hollowed out for animal and human shelters.

The other important tree is here is the Acacia, that is the one with the flat top. We saw many with long dangling nests off the limbs. The story goes that in a particular species, the male bird builds a best to attract the email bird and convince her to mate with him. He builds the best he and take sheer there. If she likes it, great. If not, she moves on over the evolutionary millennia, the males discovered that rejecting the first nest was the end of the relationship so they began building two nests. If the first is rejected, the second May work. Maybe the ensuite jacuzzi was the tipping point.

Other fascinating animal mating in year wild: when a male ostrich is really to mate, his legs turn pink. Very straight forward.
Posted by Robin at 10:13 PM

Robin
Retirement is not sitting still - it is only doing what you love! I divide my time between Nana-dom for 5 Grandblessings, pastoral work St Mark's Episcopal, and writing stuff I hope gets published.